Men with ‘too large penises’ sought

Men who have with exceptionally large penises are being sought after to tell their sex stories and walk away with a big handsome cheque.

A new documentary titled ‘Too Large for Love.’ is casting men who have large penises ‘to discuss the hidden problems of living with a very large penis and how its preventing them from finding long-term love.

“A brand new documentary is to discuss the hidden problems of living with a very large penis, how it effects all aspects of life including your sex life, and what help is out there for those in need.”

The advert, which was posted on the casting website Lost in TV, is seeking participants over the age of 18 of any sexuality or ethnicity, who have a large penis.

How to cast and show your junk 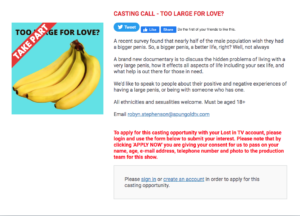 ‘Too Large for Love.’ show will be the latest in a growing long line of sex-related shows on UK TV, joining the likes of Naked Attraction and Sex Box.

In 2020, Channel 4 documentary Me and My Penis became the first programme to show an erect penis on UK terrestrial television.