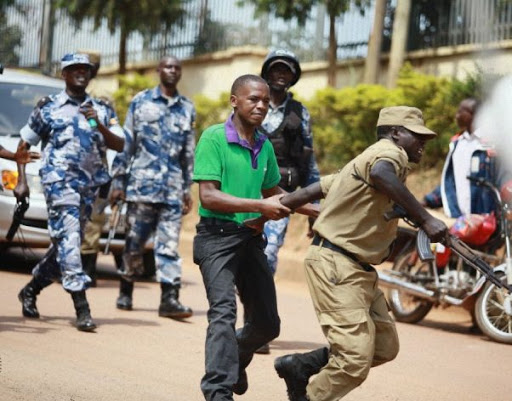 Sex workers join hands with the police to rob clients

Some sex workers in Uganda are working in cohorts with corrupt police officers to extort money from unsuspecting clients.

According to one of their victims, Luke Omara, the sex workers who do so are mostly those who operate near Speke hotel located in the heart of Kampala city center.

The sex workers are able to carry out their raids without fear of the police.

Luke says that although there is a curfew that starts at 9.00 pm, the sex workers operate undercover all night long.

He narrates: “I was starving sexually when I decided to go and pick a sex worker along Speke road near Speke hotel. There were four standing at a corner of one of the buildings. They beckoned me.

“I went where they were standing and one of them told me hers was still fresh, having had no man yet to fuck her. Another one pulled me towards herself and said her breasts were the sharpest among them.

“I picked one and we went aside to negotiate the terms. She said she would charge me only 20,000 Uganda shillings per round inclusive of room charge.

“She then led me to a small room at the gate. I guess it was the gateman’s room. Immediately we entered, two armed policemen came and arrested me. They said prostitution is illegal and they were taking me to the central police station to be arraigned in court the next morning.

“They took me to a hedge about 30 meters away. There was no light and so from there they could hide and see whoever entered the room which they picked me.

We started negotiating about how much I had to pay to get my freedom. They wanted me to pay them 100,000 Uganda shillings but I said I had only 40,000 on me.”

Another Mzungu client parted with $200 for his freedom

“While we were negotiating, one of the sex workers got a mzungu client and took him to the room. Immediately they got in, one of the policemen left us and went to arrest the mzungu. He was also bought to the dark alley where we were.

“The mzungu, whose credentials indicated he was an EU diplomat, confessed that he knew what he was about to do was wrong and offered the policemen 200 US dollars for his freedom.”

In about one hour that I spent under the captivity of those cops negotiating the bribe, four men were arrested and they all had to part with something to be let free.

“At last, they accepted the UGX40,000 I had and let me go. I later came to learn that the sex workers work connive with the police officers who offer them protection and together they share the money they get in bribes.”