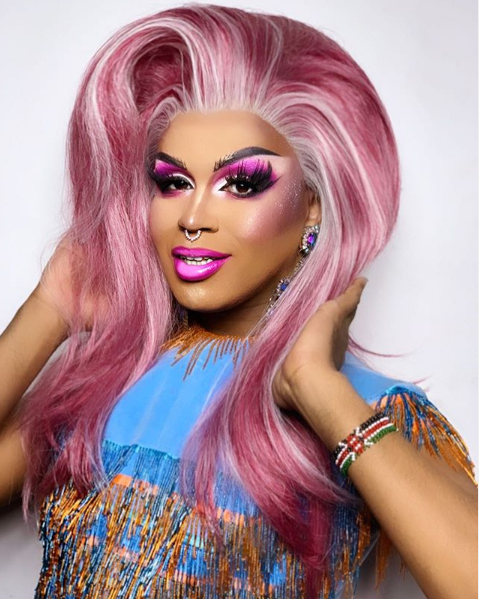 In its 11-year history of RuPaul’s Drag Race, a wildly-popular American reality television series that documents the search for “America’s next drag superstar no Muslim had ever appeared on the show until Mercedes Iman Diamond came along.

During the 11th season of RuPaul’s Drag Race Kenyan-born Curran, known by the drag name “Mercedes Iman Diamond”, not only became the first Muslim queen on the reality show, but also the first Kenyan and only the second African, after drag star Bebe Zahara Benet.

Mercedes was among the 15 queens sourced from the US, Vietnam, Korea and Kenya that made up the cast for the drag-tastic 11th season of RuPaul’s Drag Race. It was a walk in the park to make the cut and Mercedes auditioned a total of four times before she was finally accepted on the eleventh season of the reality show.

Who the hell is a drag queen?

A drag queen is a person, usually male, who uses drag clothing and makeup to imitate and often exaggerate female gender signifiers and gender roles for entertainment purposes such as in Cinema and movies.

For much of its history, drag queens were men, but in more modern times, cisgender and trans women, as well as non-binary people, have bought into the persona and performed as drag queens.

Also read: What’s the big deal about wood sitting on a bed? Here’s all you need to know about the man bigger than Corona

There’s no one way of referring to them. Some drag queens prefer to be referred to as ‘She’ while in drag and desire to stay completely in character. Other drag performers, like RuPaul, are completely indifferent to which pronoun is used to refer to them.

How Mercedes Iman Diamond came into being

This self-proclaimed “African Princess” was born in Mombasa, Kenya and moved to the US when he was 11 years old.

Her drag queen persona wasn’t immediate, however, and took another 10 years to be born.

As for her name, the VH1 show’s website explains how Curran settled on her drag name: It refers to the first Mercedes Benz that Curran owned at the start of her drag career, her sister’s name, “Iman”, and, lastly, “Diamond”, after her drag mother.

Although she did not make it all the way, Mercedes said she has ‘no regrets’ with her experience challenging other top drag queens for a chance at the crown.

“The reason why I didn’t cry when I got eliminated [was] because my time was up,” Mercedes said. “I made it to RuPaul’s book.”

Mercedes is well established on the pageant circuit and refers to herself as an “everything queen”.

After appearing on RuPaul’s Drag Race and becoming the first Muslim Queen on the show, people kept wanting clarity over her ethnicity. Is the drag star Kenyan, Somali or Kenyan-Somali? Well, she’s everything queen so that should end the debate.

Going forward, she hopes to be a voice for others who are too scared to speak for themselves. The queen now intends to tour around the country showing everyone how proud she is to be a gay Muslim queen.