The global sex industry is worth billions of dollars and boosts millions of workers. As of 2012, there were an estimated 40 – 42 million sex workers in the world. The number has since risen and by now there may be over 50 million escorts across the world.

Amsterdam, where prostitution has been legal since 1999, has long been considered the sex capital of the world.  Amsterdam’s fabled red-light district, De Wallen,  is the go-to place for international sex tourism, where sex workers offer their services for approximately 50 euros, or $57.

Thailand is spoiling for a fight and in recent years has earned the dubious title of ‘modern sex capital of the world’. Pattaya in Thailand is considered the country’s biggest red light district and has a reported 27,00 prostitutes, roughly one for every five people. Overall there are over three million sex workers earning a livelihood in Thailand.

Who are sex workers?

Often referred to as the “Swedish” model, the Nordic model works to end demand for sex work by punishing buyers and third parties—such as managers or brothel owners—but not sex workers themselves.  Under the Nordic model sex workers are treated as victims and not criminals.

Despite its good intentions, the nordic model has one fatal blow. The Global Network of Sex Work Projects (NSWP) is greatly opposed to the Nordic model and wants the entire framework scrapped since it greatly perpetuates stigma against sex workers, leading to discrimination in social services, housing, and health care, and does not actually address the fundamental problem of criminalization, instead it drives sex work underground and put the very lives of sex workers at risk.

Research also shows that criminalization of clients and third parties hasn’t been effective in achieving its intended goal of abolishing—or even reducing—sex work. In France, for example, the purchase of sexual services was criminalized in 2016 and two years later a study demonstrated that the impact on sex workers was severe, including major deterioration in living conditions and greater exposure to violence. In Sweden, where criminalization of the purchase of sexual services was introduced in 1999, has also seen online advertisements for sexual services increased exponentially in the past decade.

Why use the term “sex worker” rather than “prostitute”? 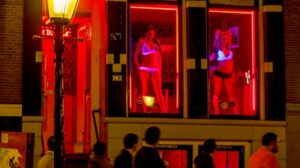 The term “sex worker” recognizes that sex work is work like no there and that a sex worker can be your sister, brother, uncle etc. and that at the end of the day the only crime sex workers commit is to sell sexual services in order to earn a livelihood.

Prostitution, on the other hand, has connotations of criminality and immorality. the name alone has negativity embedded on it and the minute one mentions it they mentally imagine a law breaker. Many people who sell sexual services prefer the term “sex worker” and find “prostitute” demeaning and stigmatizing, which contributes to their exclusion from health, legal, and social services.

What is human trafficking, and how is sex work different?

Human trafficking is an egregious human rights violation involving the threat or use of force, abduction, deception, or other forms of coercion for the purpose of exploitation. This may include forced labor, sexual exploitation, slavery, and more.

Also Read: Types of sex workers and where to find them

Sex work, on the other hand, is a consensual transaction between adults, where the act of selling or buying sexual services is not a violation of human rights. Conflating trafficking with sex work can be harmful and counterproductive.

Prostitution, sometimes referred to as the world’s oldest profession is one of the richest, most diverse and well paying jobs in the world today.

However, engaging in sex work is not a walk in the park. Many people choose to look down on sex workers and even use them as subjects of bad choices and examples in life. Some people consider it a moral issue while others see no problem and consider sex work as nothing more than another form of making ends meet.

What many people don’t know, however, is that some of the idols and models they look up to at one point in their lives worked as sex workers and to date have no shame about it.

One such idol and international celebrity who traded in flesh and has no qualms about it is an American female rapper Cardi B who rose to fame for talking about her career as a stripper in a Vine video that went viral.

The cradle of mankind is home to millions of sex workers who service local and international clientele in different parts of the continent.

The existence of prostitution in Africa dates back to the pre-colonial period. However, in Africa, prostitution has always been a contentious issue not only among the public but also among lawmakers. This has made the trade to not have a one-size-fits-all status. Some countries have worked hard towards decriminalizing the profession, while others have made prostitution completely illegal and punishable by law.

Also Read:  9 best African countries to work as an escort

In Africa a trend has emerged where escorts migrate to countries with higher GDP and locations where working as a sex worker is legal. Case in point is many Nigerians cross over to work as escorts in Ghana primarily because there are more opportunities in Ghana. The same trend has been witnessed in Senegal, Ethiopia and South Africa to mention but just a few.

What is the way forward

The first step in making the lives of sex workers much better is by decriminalize sex work.  Decriminalization means removal of criminal and administrative penalties that apply specifically to sex work, creating an enabling environment for sex worker health and safety.

The next step is recognizing sex work as work. This simple yet powerful statement frames sex workers not as criminals, victims, vectors of disease, or sinners but as workers. Allowing sex work to be governed by labor law and protections similar to other jobs. While decriminalization does not resolve all challenges that sex workers face, it is a necessary condition to realize sex workers’ human rights.

Experts and activists argue that the most effective way to address exploitation, including human trafficking, is to strengthen sex workers’ rights and address economic injustices. Precarious work, restrictive migration policies, and gender inequality all contribute to greater vulnerability to exploitation.

Here are a list of proactive measures NSWP recommends to end stigma against sex workers.

◗ Recognise sex work as an occupation and its inclusion in ILO categorisation of occupations.

◗ Recognise that there is nothing inherently harmful or exploitative in buying or selling sexual services.

◗ Accept that sex workers of all genders and health status be allowed to work in the sex industry.

◗ Recognise that sex work must not be subjected to ‘special’ laws or extra taxes that serve to further restrict or exploit sex workers. Instead, sex work must be regulated by standard labour and business codes, including occupational health and safety standards.

◗ Support work-related social and financial entitlements including annual, sick, and parental leave, medical and parental benefits, accident compensation, pensions and all other benefits enjoyed by other groups of workers.