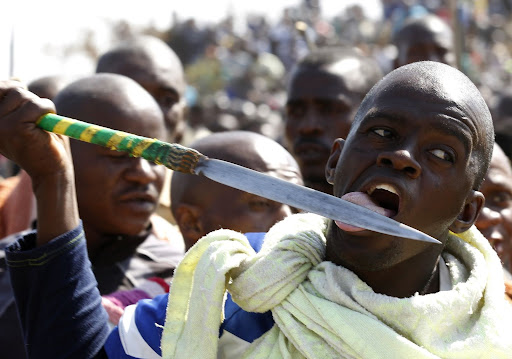 Police in Uganda are holding a man who reportedly killed his wife after busting her being fucked by another man.

“We are holding a man who killed his wife after finding her having an affair with another man. We are investigating the case,” said Oweyesigire.

Tito Oyoket, a resident of Kampala’s outskirt trading center of Kasubi is a night watchman. He went to work as usual but around midnight he returned home hastily after he had got a call from one of his neighbors who informed him that his wife was being fucked by another man.

Also Read: ”I do not need to have a penis as big as a spade because I am not a gravedigger.” – Ugandan Tycoon

On reaching his house he first went to the window to get assurance that the woman was being fucked. On hearing his wife screaming as she enjoyed the fuck he angrily kicked the door and broke it before entering the house and catching the pair red-handed pants down.

A brief fight ensued between the two men as blows and kicks flew before the man managed to flee while butt naked.

Oyoket then picked a knife and chop off their wife’s head. After committing the heinous crime he went to a nearby police post and reported himself.

”When I heard noise from Oyoket’s home I woke up and went thee to see what was amiss. Unfortunately by the time I reached there he had killed his wife.” Alex Ochan, one of his neighbors said.

The village chief, John Kawale, condemned the act and advised married couples to always seek marital advice from friends and family whenever they encounter problems instead of taking the law into their hands.