Nothing sells faster like sex in the pearl of Uganda so much that female vendor have now joined the trade of flesh.

A group of market vendors in Jinja in Eastern Uganda are now smilling all the way to the bank after they started hawking sex in the middle of the market.

Jinja central market is one of the brand new markets which was recently constructed by the government of Uganda. The market has over one thousand stalls selling all types of merchandise and food stuff. 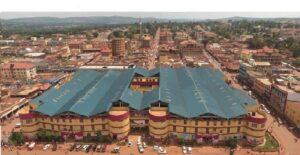 Sex as sweet as ripe bananas for sale

Also Read: Russian looking-like sex workers hit streets of Kampala but some men who have sampled them now say local black women are better in bed

Fruit vendors who sale bananas come into the market with big boxes in which the bananas are kept. It is these boxes that at-least 5 female vendors have turned it into temporary lounges for sex. They do it tactfully without authorities knowing what takes place.

According to Bryan Wanyama, a male market vendor who deals in second hand clothes he has already fucked 3 of the 5 women who sell sex in the market.

“They only do it with the men they trust and know preferring those working in the market.”

Wanyama says that the market women are fucking sweet compared to their wives at home.

“Some of us are married men but we do not enjoy sex with our wives and that is the reason why we come and do it with these women in the market.” said Wanyama.

One of the reasons men now form a queue to the banana stall not to buy bananas is that the women selling sex are young and have much experience in sex. Better still the women also keep mum about the whole sexcapade and only talk about it with their closest friends.

According to Mr. Wanyama he personally knows about 20 men who go for those women and there are many more whom he does not know.

In order not to raise suspicion, the vendors play loud music near the boxes where they fuck. Since the huge boxes are behind the stalls, it is difficult for customers to know what takes place behind it.

“They make it a point that there is someone selling bananas at the stalls all the time as sex adventure take place in the boxes. ” revealed Wanyama.