There’s a Swahili saying that goes; “Mombasa raha, kuingia ni rahisi kutoka nimatanga.” which translates to its easy to go to Mombasa but hard to come out.

No one can resist the bewitching beauty of Mombasa and have another go of the Sun, Sand, Sea and Sex for the umpteenth time. I mean, just ask Kenyans about it, they are hooked. Year in year out the Coffee & Sex script is always the same; Kenyans would drop everything to have another go of ‘Mombasa raha’ be it during the Easter holiday or Christmas and New Year festivities. And once they taste the hot, humid air of Mombasa ‘watu wa bara’ (Inland residents) as they are referred to by the locals go gaga. They literally let everything loose and forget everything in the spirit of ‘Kula raha Kifo Chaja’ more specifically You only Live Once (YOLO). 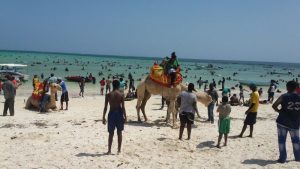 Some are even known to acquire fake Swahili accent while they are down here. Who wouldn’t? What with beautiful Swahili women sashaying across narrow streets as sweet aroma of mouthwatering pilau waft through the air not to mention the vibrant rich culture dating thousands of years back.
Both locals and foreigners have been known to turn into ‘zombies’ with the first tasting of Pilau. They have gone crazy and fallen in love with this popular dish made and packaged in Mombasa.

For the historical buffs, Mombasa is a treasure waiting to be explored; you would be mesmerized by the rich historical artifacts and Swahili culture.

Historical fact: Did you know between the 15th and 19th centuries, Mombasa saw plenty of war and for this reason; the city was nicknamed Mvita, which in Swahili translates to as the Isle of War. Vasco Da Gama pillar, Fort Jesus and Gedi ruins are must-visit sites while you are in Mombasa. 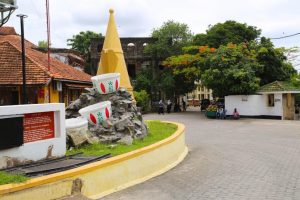 One thing hard to miss while you are in Mombasa is coffee drinking culture. So popular is coffee drinking here that a whole monument was built to epitomize the culture. Exactly at the entrance of Old Town and outside Fort Jesus sits a large colorful coffee pot locally known as (buli) with three Arabian coffee cups – two of them on top of each other and one enjoined to the two with a layer of cement – sitting beside the kettle. The coffer pot traces its history to 1988 when it was first erected by Mr Burhan Ali Taher as a gift to Mombasa residents.
According to the National Museums of Kenya, the buli is a metaphor of shared cup of coffee and its significance in bringing people together.

Kahawa tungu/chungu and Pombe ya Mnazi 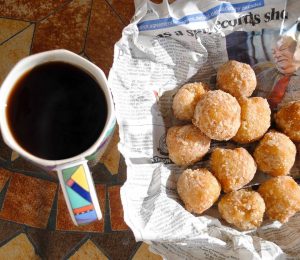 Drinking coffee is a revered culture at the Coast. Young and old, men and women consume coffee at maskans (bases) as they share stories on the day’s events.
They all religiously frequent the coffee joints to sip Kahawa chungu (bitter coffee drink without sugar and used as an aphrodisiac by the locals). Those with a sweet tooth order kahawa tamu (dilute coffee with sugar).

The ingredients for both include cinnamon, sugar, cloves and cardamom (iliki) and sometimes nutmeg, but the concentration varies.Coffee goes with mahamri, kaimati (bun made from deep-fried dough) and other local snacks.

It is easy to dismiss the coffee craze as just another random social activity locals indulge to pass time but hold your horses. Scientists have proven that drinking just two cups of coffee a day could dramatically improve your sex life. 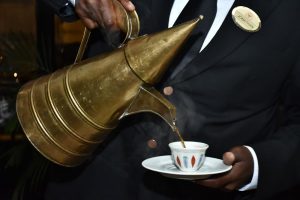 A study by the University of Texas found out that men who drank two cups a day where 42% less likely to suffer from erectile dysfunction compared to men who didn’t. Scientists believe it could be because the caffeine triggers a chemical reaction that increases blood flow to the penis by relaxing muscles. One’s chances to suffer from ED also dipped with more cups of coffee consumed. A separate study on 25,000 middle-aged men and women also found that drinking three to five cups a day could reduce the chances of one suffering heart disease or stroke. Back to Mombasa; Once you have ordered your cuppa you will feel right at home mingling with the locals who will regale you with rib-tickling tales of life and the essence of youth while sipping Kahawa tungu/chungu.
It’s actually the best way for a teetotaller to while away the evening and lessens stress while down in the Coast.

Once you have downed your 11th cup of Kahawa tungu it might now be a good time to try a stronger and more heady local drink. Under a coconut tree you will soon forget all your worries and sorrows as you sip fresh traditional beer ‘Pombe ya Mnazi’.
The beauty of it all is that there’s even a local lingo which will need to master of requesting your Pombe ya Mnazi. Dabali is a one litre bottle of the heady stuff and it comes with Mrija (bamboo stick Staw) from mama safina. If you want to experience fun then Mombasa is the place for you after all it is not referred to as ‘Mombasa raha’ for no apparent reason. Kenyan coast has one of the most vibrant nightlife in Kenya.

The Kenyan coast is lined with pristine palm-fringed beaches, such as Nyali, Vipingo, Kikambala and Shanzu to mention but just a few on the north coast. The peaceful beach havens of Mtwapa and Takaungu are an ideal escape from the outside world, with endless deserted beaches. Jomo Kenyatta Beach, the largest public beach in Mombasa. popularly known as Pirates Beach is just a few minutes away from Mtwapa town

While in Mtwapa, a drop in at clubs like Lambada, Lollipop and Fun Fun will leave you breathless and begging for more. What’s more, you can easily hook up with countless escorts to your fill. The town comes alive at night and the party goes on until dawn.

One thought on “Coffee & Sex: Why locals down at the Kenyan coast can’t go a day without a cup of aphrodisiac Kahawa Tungu”