Yes! It’s Halloween and you know the plot. Let’s throw caution to the wind and on this single day be bold as bats and scare the shit out of each other. C’mon, it’s Halloween so don’t be a wet blanket man.

I dare you to say no and I will haunt you forever, I will curse your family and condemn you to a slow cold miserable death, make my day and dare me James*

Just in case you are a ‘scientist and slow’ Halloween is the day of “souling” and “guising” According to history.com the tradition originated with the ancient Celtic festival of Samhain, who would light bonfires and wear scary costumes to ward off ghosts on the night of October 31.

Clear? Now that we are all in agreement let the games begin. Since we are all adults how about we take things a notch higher.

Stuff that separates boys from men

For this Halloween festival, we will not only wear scary costumes and win but also make out in scary outfits at some of the world’s scariest places.

Don’t be a sissy, grab your custome, and let’s go make love in hell if need be.

Island of the Dolls 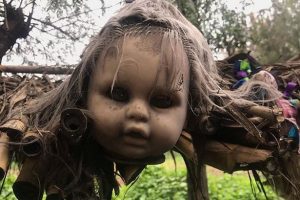 How does making out while soulless human dolls stare at you? Welcome to the Island of the dolls locally known as Isla de las Munecas. This tiny creepy Island in Mexico is home to hundreds of decapitated dolls. After finding a dead girl’s body in a nearby canal, the island’s caretaker spotted a floating plastic doll, which he hung in a nearby tree as a mark of respect in the hopes of warding off evil spirits. Over time he kept hanging more and more dolls so ask yourself why?

If you have balls made of steel how about you make your way to Langata cemetery in the outskirts of Nairobi and make out on top of a grave? Mark you, that the cemetery was declared full by the defunct Nairobi City Council in 1996 but it is still receiving fresh corpses to date. 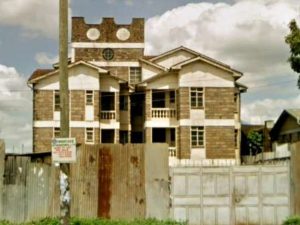 Forget haunted houses, how about you really grow some balls and go make out in Ruiru’s house?

According to media reports, this house has been vacant for more than 30 years due to fears of jini (evil spirits) infestation.

Patrick Kinyanjui, a boda boda rider who hails from the area told The Nairobian, a local tabloid that the house is a no go zone. He rather be shot dead than spend a night at the haunted house.

“I used to have friends who lived in this building and they would tell me how they were beaten at night by jinis. They also used to say that there were times when they would find themselves sleeping outside in the morning. Women also started saying that they were raped by people they didn’t see” said Kinyanjui.

Enjoy hair raising sex on the cold slabs of city mortuary and make out until you drop dead. City Mortuary in Nairobi is one of the biggest city-based morgues in East Africa. As of July this year 151 unclaimed bodies laid at the mortuary so you will have plenty of company.

On the outskirts of Nakuru, sits this magnificent castle that is believed to be haunted by the ghost of Lord Egerton. The story behind Lord Egerton Castle is a heart-wrenching tale so grab some tissues.

Lord Egerton met an Austrian woman and fell deeply in love and wanted to marry her. He invited her to his modest – by royal standards – six-bedroom house on a 22,000-acre piece of property to see her future home. Legend has it the beautiful woman did not spend an hour in the compound, brusquely telling him that she “could not live in a chicken coop.”

To cut a long story short, Lord Egerton rolled up his sleeves and built the castle which stands today and once again invited the woman of his dreams to check it out. Like a cursed man, she wasn’t impressed and turned him down once again, claiming the house was “no better than a dog’s kennel.”

She left in a huff to marry another British lord in Australia. Lord Egerton died a few years later of grief and heartache.

Until his death, he banished any woman from ever setting foot on the 100-acre grounds on which the castle stood. Any chicken would also be instantly slaughtered if it wandered off to Lord Egerton castle.