So which side of your relationship is buttered?

One of the biggest lies in relationships is that both partners are equal and therefore equally control the relationship. I am sorry to burst your bubble but that’s a scam son.

Forget what love experts say or what your favorite telenovela potrays, a relationship isn’t always a 50/50 partnership. One partner calls the shots while the other do the bidding. Don’t get it twisted though that a man automatically is the one pulling the strings, no women too have their ways and boy! they have skills.

In most relationships you will find that one partner is crazy while the other tends to be cool. When one is a control freak, you can bet the other one is more understanding and easy.

How I met Your Mother? 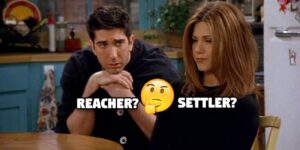 Are you a fan of American Sitcoms? Then you must be familiar with ‘How I Met Your Mother’. The amusing drama series gave birth to the Reacher and Settler Theory. The theory states that in every relationship there is a Settler and a Reacher. This simply means that one of the two partners in a relationship settles for the other. The other person, however, is involved in a relationship with someone out of their league, the Settler.

Ever come across a couple and asked yourself, ‘Why would SHE date HIM!” Of course, you have. An example is when a very attractive woman dates an extremely unattractive guy, who happens to be a sweet dude. The sexy lady is clearly the Settler and you would definitely tell her that she could do better. However, the man has to constantly give lots of gifts or praise, and thus becomes the Reacher.

Another example is when you have that awesome feeling when you are getting hooked up with your partner for the first time. It begins as rather low-key, casual fun and the sex is always good. Then it gets to a point where you actually enjoy each other’s company but the man, in this instance, isn’t into the lady as much as she is into him. The woman realizing she needs ‘more’ develops an urge to text him first and more. This makes her the Reacher.

In all the relationships I’ve had, an inability to get the power balance right eventually led to a breakup. I realized that this balance can be thrown off in many ways. Many people end up being treated badly and feeling disrespected in their relationships. Consequently, there are a lot of people not treating their partners the way they should in a relationship. And I was one of them for many years.

Typically, it would start off with Nim Notty meeting a girl who wowed me, who inspired me, and whom I looked up to. I felt like the reacher. But over time, after spending one or two years together, sometimes moving in, sometimes not, the initial enthusiasm would fade, and the balance would change. The inspiration I got was no longer enough. My partner would begin to bore me to hell. I didn’t want to settle and couldn’t even stand how they breathed. I felt superior. And I hated myself for it: I never wanted the relationship to take this course.

Whenever I recognized this pattern, I desperately wanted it to stop but it kept happening. My partner would end up being the one wanting me, needing me, loving me more. And I would be unhappy, unsure of where the love had gone, finding myself turning to new inspiration elsewhere, thinking I was with the bad guy. And then it would all start over.

I got fed up with the same old cycle and had to make a change. Here is how I did it:

How To Keep The Balance

Being infatuated doesn’t mean that the relationship will last forever. Stop being a hopeless romantic. Always aim to understand who you are and what kind of person you want to be with.

Make sure you both feel connected and not attached.

Mindfulness and communication are important. Don’t slip into a place you don’t want to be, and, equally important, don’t let your partner slip.

Also Read: How to make your partner feel appreciated without spending a dime

Beliefs are powerful. Whichever role you assume yourself to be, your environment and relationship will manifest that.