The Kenyan men community are in deep mourning following the death of Mzee Jackson Kibor, who captured kenyan minds with his humour and ‘interesting and controversial’ personal life.

Until his demise, Mzee Kibor was the undisputed ‘men’s conference chairman thanks to his larger than life personality and the knack to bag young pretty girls who loved his colorful life and deep pockets. Mzee hogged national headlines with his long, salacious and successful divorces. He married four wives and has several children. 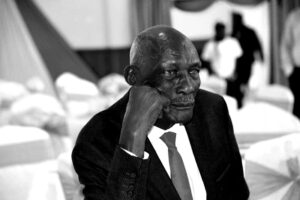 He dropped out of school in 1957 in Standard 5 but went ahead to prove his prowess in making money and by the time of his death he was estimated to be worth Sh6 billion ($60 million).

As a result following the death of Mzee Kibor, Kenyans went to social media and started drumming up support for Omar Lali to become the new men’s conference chairman given the uncanny similarities between the two.

Men’s conference chairman mr Jackson Kibor is no more. I have received the news of his passing with great sadness. He is a man we all loved for his humor and interesting personal life. Go well General wa boy child. Rest In Peace pic.twitter.com/9fSGAkeC1O

Here are 5 fucks about Omar Lali

From Lamu to the world 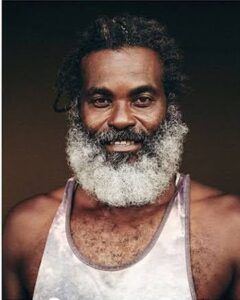 Omar hails from the coastal region of Kenya. He was born and raised in Kizingitini, Lamu East and later moved in with his relatives in Lamu Archipelago.

Little is known about his family apart from the name of his mother who is called Aisha Mohamed.

He has a brother named Quswai Lali Omar who works at Peponi Hotel in Lamu and is a Capenter by profession as per his twitter handle.

From dhow operator to Beachboy- jack of all trades

Omar is the poster child of a true ‘hustler’ and boosts a number of handy hands on skills. He works as a Beachboy, tour guider, dhow operator among other hustles.

It was while doing his job that he met Keroche heiress the late Tecra Muigai and the two struck a relationship.

He is essentially your plug for anything you need when you go to lamu, of course for a small fee.

Match made in heaven? Tecla muigai and Omar Lali story 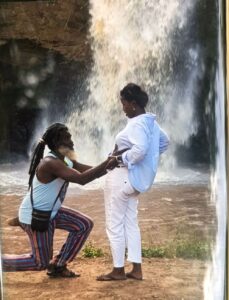 Omar and Tecla met in 2017 and the two struck a friendship that blossomed into an intimate relationship.

“He had gone to Peponi Hotel to drop luggage belonging to some tourists when he found a lady (Tecra) in commotion with the owner over a bill. Lali bailed her out after realizing she was the same tourist he had dropped at the hotel days before,” said Mohamed Ali Mohamed, Lali’s cousin.

Since then, Tecra became a regular Lamu visitor and would stay for months on each visit. The two would spend most of their time at the Diamond Hotel in Shella or Peponi and would normally be seen basking in the sand or resting at the seafront at night.

Everything came crashing down in 2020, when Tecla reportedly fell down stairs while inebriated and was rushed to Shella Dispensary where she was referred to King Fahad Hospital on April 30. She later succumbed to her injuries.

The family of the late Tecra, however, accused Omar, of the murder. He was arrested for the murder but later released after the Director of Public Prosecutions found no evidence to link him with Tecra’s death.

Ladies can’t get enough of him 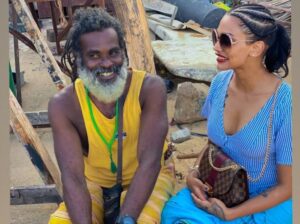 I don’t know if it’s his beards, looks or just sheer charisma but Kenyan women go gaga every time Omar Lali enters the scene. His long grey beard immediately arrests your attention and gives him an aura of one who is wise in the ways of the world.

He has been spotted with a number of beauties who seem to find him irresistible. A video was shared on social media platform of a young woman getting cozy with Lali as she tells him he ‘smells real good’.

The fact that he also speaks several languages including English, German, Dutch and French makes him a magnet of both local and foreign wazungu who come to Lamu to enjoy the sun, sand, sea and sex.

He reportedly has a baby girl with a German lady and others with an Italian and Dutch lady who he had befriended when they came to Lamu as tourists.

Omar radiates warmth and love wherever he goes 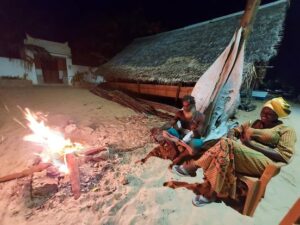 There is an air Omar carries himself with that seems to disarm every person who crosses his path. I mean there is a way he makes them relax or laugh while taking selfies with him. One such person who was smitten by his warmth is Kenyan comedienne Zeddy who went all the way to Lamu to enjoy his company.

The entertainer who had previously mentioned that she hoped to meet the beachboy later shared cordial photos of the two at the beach. Omar also melts the hearts of influential people and he has in the past been photographed by established media personalities including renowned journalist Yassin Juma and business persons.

His brother, Quswai describes him as “ a good caring Dad and Our Mentor!! He has always been good to us, including the late Tecra Muigai.”