The Kenyan queer community is shell shocked following a gruesome murder of a young Kenyan girl in Karatina town.

On Thursday, Sheila Adhiambo Lumumba was gang raped by six men after they broke into her house for allegedly being a lesbian. 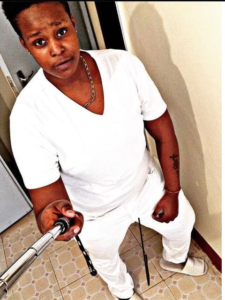 According to Njeri wa Migwi, a Human Rights Defender and the founder of Usikimye, an organisation that fights for sexual assault victims who posted her ordeal on her Social media handle, six men broke into her house, gang raped her, broke her leg before killing her according to the autopsy report.

We are tired of reporting Queer Deaths and demanding for justice! We are tired of being looked at as less than others. #protectqueerkenyans#justiceforsheila See you on the 23rd. Numb 💔 https://t.co/CLtk2nvG2Y

A section of Kenyans have taken to social media to condemn the sex assault and calling for justice. International organisations such as Amnesty Kenya have also added their voice in calling for #JusticeForSheila

No one deserves such cruel treatment. Sheila didn’t have to experience all this pain. We are standing in solidarity with the family of Sheila Adhiambo during this trying moment and we shall follow up on this case until justice is delivered. #JusticeForSheila #QueerLivesMatter https://t.co/K3eJ0VOtwT

Sheila used to work in Nyeri and resided in Karatina a place called Muthua where she was attacked.

Queer Lives in Kenya Matter!
Sheila Adhiambo Lumumba did NOT deserve such cruel death🤚🏾🛑
We Call upon the @DCI_Kenya @Kenyajudiciary @NPSOfficial_KE @ODPP_KE to investigate the perpetrators of this cruel act!#JusticeForSheila #ProtectQueerKenyans