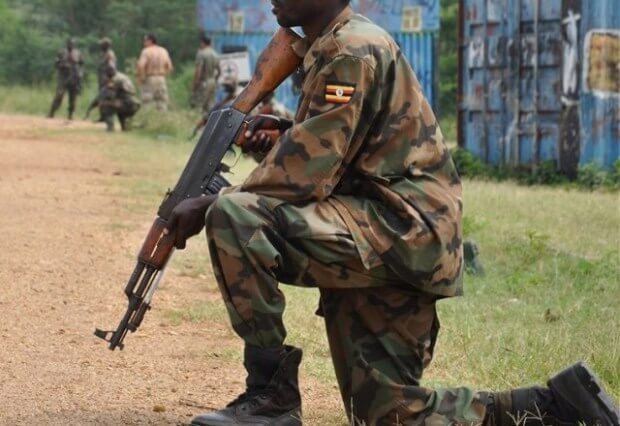 A family in western Uganda is trying to come to terms with the deadly assault of 4 relatives at the hands of a soldier attached to Uganda peoples’ defense forces.

The killer cop, who has been identified by the police as Godson Mutahire and based at Kafuro barracks, in Rubirizi district, turned his gun on his estranged wife and three relatives before going on the run

According to police investigations Mutahire late wife, Scovia Kziire, ran  away from their home a few days ago citing cruelty and fled to her parents’ home in Nkondo village found within Rubirizi district.

She claimed that her husband usually mistreats her especially whenever he get drunk.

Soldier pleads with wife’s family to no avail

After the woman fled to her parents’ home, the soldier attempted to negotiate with the parents so that his wife could return home but the negotiations didn’t bear any fruits.

It is then that Mutahire decided to go to their home while armed to try and forcefully drag his wife back home. When that failed he decided to open fire.

Charity Katusimiire, one of the relatives of the late Kziire who was present says Mutahire showed up at the ungodly hour of 3:00am in the  morning and unleashed terror.

4 people dead, soldier on the run

Rubirizi district police commander, Abel Muwonge said police are currently on the trails of the killer soldier who is on the run.

”After killing the four people he fled. He fled with his gun so we fear that he might use it to kill other people.” said Muwonge.

Local district leaders, led by the district vice chairperson John Mubangizi expressed sorrow at the turn of events and demanded that the Ugandan army ensures the killer cop has been apprehended and brought to justice.