Get a Zoom* you two

Zoom calls are the in thing right now thanks to the coronavirus pandemic. The video call service facilitates virtual meetings as people self-quarantine and work from home. Since it came into use there have been several incidents one couple has, however, taken things a whole notch higher.

A couple was captured live on camera having sex during a Zoom meeting.

The meeting started well before things got hot 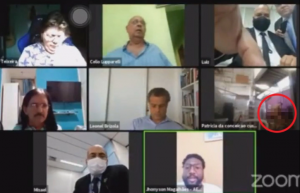 The Rio de Janeiro city council was hosting a zoom call chaired by the Socialism and Liberty Party, Leonel Brizola when things got hot midway.

According to local newspaper Metropoles, the committee was discussing how to guarantee food for students in the municipal system during the pandemic.

The meeting, which started at 10am, was proceeding as planned until one of the participants left the meeting and began to have sex in the background with the camera still rolling.

Forgot to turn his camera off

The couple began to get frisky, completely unaware that colleagues were watching in horror. The footage captures the Zoom participant in the middle row on the right-hand side of the screen ‘leaving’’ the meeting and starting having sex on the bed in the background.

Unbelievably, the councilors involved noticed the scenes but decided to ignore it and continue to discuss the matter at hand. The meeting reportedly continued for another four hours without further interruption.

Later in a statement, Brizola said the episode was an “involuntary indiscretion” and regretted that the actual topic of the meeting was not being highlighted in media reports.