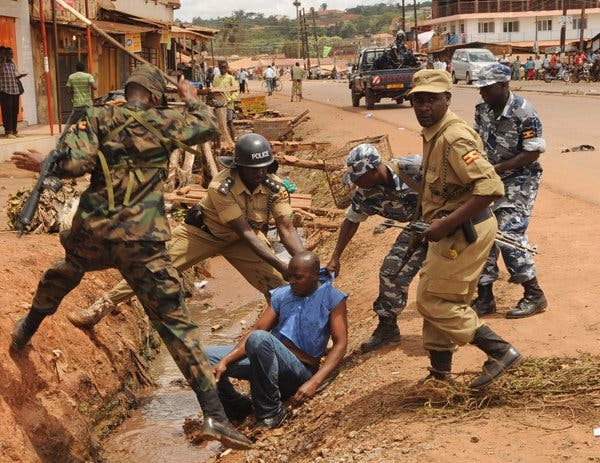 Sex worker and a dead soldier

Ugandan National Army and the police are on a manhunt mission to arrest a sex worker and her male accomplices who murdered a soldier in cold blood.

Mubende town in south western Uganda district where the soldier was killed is now a ghost town after residents flee in fear of being targeted and clobbered by the security men on a mission to avenge his death .

The brothel where he was robbed before being killed is now deserted.

How the soldier met his cruel death

According to Mwebetombera, a councilor at the area where the brothel locally known as Robert Kawuma is located sergeant Chris Opio visited the brothel to procure sex  and paid UGSh10,000.

”It is reported that he withdraw UGSh500,000 shillings from an ATM and went to the brothel loaded. He then paid one sex worker UGSh10,000 and had sex with her.”  said Kawuma.

As he was busy fucking the sex worker his money went missing. It is alleged that the woman stole the money.

After he was finished, Opio decided to venture out to buy a cigarette but alas he had no money. He rushed back and confronted the woman to hand over his money.

With no where to hide, the sex worker sounded an alarm to call for support from his gang who work in cahoots with sex workers whenever they rob clients of their money and  possessions. The men descended on the soldier with blows and kicks and beat him to death.

As soon as the soldier dropped dead, the woman and the killers fled leaving the body behind in a bid to escape the wrath of the army and the government..