A super sexy Ugandan Singer whose curvy body is giving men sleepless nights has had enough of men from the western Uganda city of Mbarara.

Singer Julia Tugumisirize popularly known as Julia Musik told Uganda’s Red Pepper she is fucking fed up with Mbarara men who apparently love free sex as if it isfree manna from heaven.

Julia Musik said that men in Mbarara City after only buying one bottle of beer for a babe usually start pestering demanding for a bonk session.

Who is Julia Musik 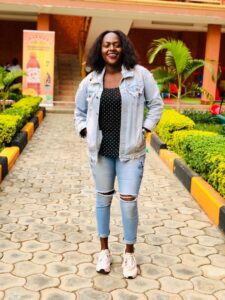 Julia Musik is one of the hottest and fastest rising musicians from the pearl of Africa.

The Singer is super talented and says it is risky for one to stick to one music genre. To this end she is experimenting with Amapiano music style  fused with Runyakitara and It is actually good on the ear.

She recently released the visuals for the first Amapiano song in Runyakitara. To say the song “Yebare” sounds beautifully different would be an understatement.

The Mbarara City based singer whose first singles were ‘Dating’ and ‘Disco’ has since released other songs. These include “Demand”, ‘Romantic’ and ‘Yebare’

She traces her music journey to a band some seven years ago.

“It all started in 2015. I was a backup singer in a band.  Along the way, I developed the nerve to try it on my own and I have no regrets so far,” she says.

Mbarara is a beautiful city in the Western Region of Uganda and is the main municipal, administrative, and commercial center of Mbarara. The region is famed for its Long horned Cattle.

The town is also an important transport hub, lying west of Masaka on the road to Kabale, near Lake Mburo National Park. Mbarara Town is located about 290 kilometers by road, southwest of Kampala, Uganda’s capital and largest city.

Due to its strategic location, the town attracts hundreds of sex workers from as far as Rwanda. This has made many men from Kampala and other places to travel to Mbarara on weekends to enjoy sex with the Rwandan escorts.