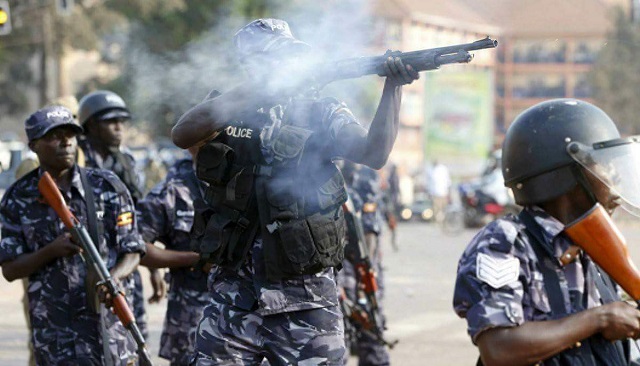 It was another busy day in Kamwookya trading center with sex workers busy servicing clients until pandemonium broke out.

This is after Ugandan police hurled tear gas canisters inside a brothel in  the suburb of Kampala leading to the sex workers and their clients who were in the middle of having sex to flee while butt naked.

We were completely caught by surprise

According to one of the sex workers only identified as Namboozo, they were inside different rooms playing sex when tear gas canisters were thrown in by policemen.

”We never knew that there was chaos going on near the brothel where we operated from. We were completely caught by surprise when we found ourselves engulfed in tear gas. Some of us and our clients fled while naked to escape the stinging smoke.” said Namboozo.”

The police and army had reportedly been deployed to stop riots that erupted around the county due to the arrest of maverick musician turned politician Bobi Wine.

Namboozo said that she ran to a nearby house where she was given a piece of clothe to cover herself.

Abubaker Kawalya, one of the local leaders in Kamwookya trading center said that police hurled teargas canisters in the building after suspecting that some of the rioters they were pursuing had hidden inside the building.

”I saw some men and women running from the building while naked with a few  carrying their clothes. They only manage to wear from while outside.” said Kawalya.

He said the sex workers and the men who were fucking cursed the police for interfering with their joy.