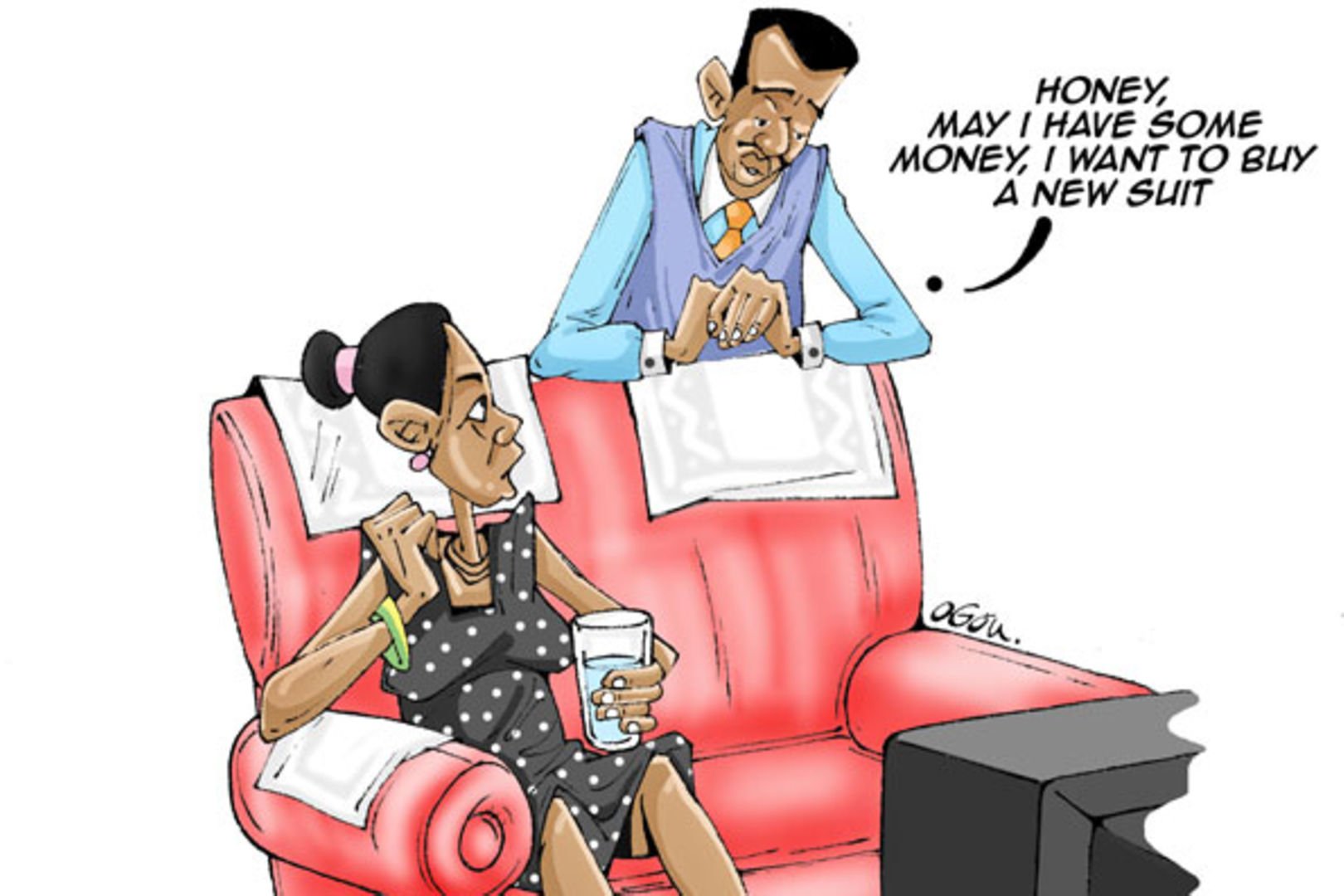 Money conversations are one of the hardest things ever couples have to deal with.

When you’re dating someone you care about, money convos can be even more awkward to have with them. This is especially true if you find yourself in a situation where you need to ask your partner for money… or vice versa.

While men in most societies have been brought up to spoil and take care of men, it’s not exactly clear what a woman should do when a man asks her for money.

So Is it ever okay for a woman to give a man money? Of course, while every situation and relationship is different—and there’s no right answer for how to have these kind of talks.

I went to Quora and popped this question and here are a few answers.

1).It is ‘very’ ok for a woman to give her man money, if he needs it and if she has it, just as it is always ok in the eyes of the women, for their men to give them money for all their needs and wants, even if it involves him stealing or borrowing.

2).The impact it has on the relationship is that it doesn’t guarantee that the relationship will last forever,just as giving a girl money will not stop her from leaving or cheating on her man when she meets a richer guy.

3). Don’t guys give their girlfriends money even though there would always be stories that touch They believe God designed them to be on the receiving end

4). It’s not ok. Does the guy want his girl to think he’s unstable, or unable to provide? He should be asking his family for money if he has the need. Asking that of a gf would cause hard feelings and arguments in their relationship.

5). Stop giving him money. Period. No debate, no discussion. Boyfriends who take money from girlfriends are called leeches. Lose them. Quickly.

6). Depends, but probably not. Nor is it right, in most cases, for a man to give a woman money. I am sure there are certain circumstances where it is more or less right. Most importantly, is it right for YOU? Can you afford it, do you WANT to give money, is he pressuring you. If you don’t want to, and or, don’t have it and he is pressuring you, RUN!!! Run as far and as fast as you are able!

7). Do not help your boyfriend financially. I’ve seen this millions of times. The girl helps the guy, pays off his loans, or pays for his car, and then he finds a new girl and drives away.

You have no recourse at all, if he leaves. You are not married to him. You can’t file for divorce, and force him to split up the assets. You just gave away your money, and he can do whatever he wants.

DO NOT GIVE MONEY TO SOMEONE YOU ARE NOT MARRIED TO.

I got dozens of stories, I’ll give you two of the worst.

One girl, the boy moved in with her. She started paying for his university education. One week after he finished university, he left, and she found out he was engaged to another girl, and he married her.

Spent 3 years of her life, feeding him, paying for his schooling, taking care of him, living with him, and working a full time job to pay for everything she gave to him…. and in one week, he was gone with his free education.

And she was not married. There was no divorce court to get back the car, or force him to pay back the money. When you are not married, it’s like giving someone a gift. You have zero recourse.

The other one, a guy moved in with a girl, and they bought a house together. So they are living in the house. He decided to find a new girl, and found one. He brought this new girl home, and was sleeping with her. Meanwhile the first girl is still there.

She can’t call police. He’s legally owner of the house, just like she is. He legally has just as much right to bring someone there, as she does. She couldn’t file for divorce, because they were not married. So she couldn’t force him out, nor force him to sell the house. She was just stuck in a house, with her ex-lover, boinking his new lover.

Listen… don’t do this. Do not give money to people you are not married to. You are begging to get your heart ruined.

8). Absolutely and unequivocally no, you should not help your new boyfriend financially. I advise this for a number of reasons.

First, You’re a relative stranger. It is not your position to lend or give him money or facilitate anything that would enhance his financial picture. If he cannot get the help from his parents, family, or close friends, there’s a good reason for it.

Secondly, you’re not married. You just aren’t. Chances are you won’t be married. What this means is that you have no legal recourse if you merge money and he decides to dick you over. Do not sign any sort of loan or contract with this guy unless you marry him.

Lastly, we on Quora talk about red flags. This one is raised high on the flagpole, waving for all to see. With fireworks, cannons, and the 1812 Overture blasting. I question if this guy should be dating or involved with anyone until he gets himself sorted. I question if he got involved with you, specifically, to get money that he “really needs”. No. Hard no. Just … no.

I understand that you want to be compassionate. But I must be blunt: people who get financially involved with uncommitted (unmarried) partners are thinking with their hormones and genitals, and not their grey matter. This makes them ripe for what I call a “soft con” in which even the con artist doesn’t even realize that they are usurious. It is not reasonable or logical to financially involve yourself with an unmarried partner. But deep down in their dark reptilian brain, that’s why these people ask such extreme “favors”—they understand that the person giving or lending them money has no way of getting it back. So it’s basically free money, a free car, a free house, a free business investment … you get the picture, right?

“My personal advice: Don’t do it unless you’re desperate. As someone who has always been more financially successful than my partner, I’ve often found myself being too generous and giving. I had one boyfriend I was with for over four years, and I’d wind up paying for nearly everything when we went out together, and loaning him money when he’d be in a bind. Sometimes he’d pay me back, sometimes he’d ‘forget.’ I thought it would be stingy of me to bring it up, so I never did. I assumed he’d always do the same for me, until the time came that I really needed his help, and he was very reluctant. It completely changed the dynamic of the relationship and put this expectation on me to pay for things almost exclusively moving forward. ”